Why would you want to do this?

Briefly, GAMs are a powerful tool that allow you to capture nonlinear patterns that a standard linear predictor would miss. Of course, it is possible to identify nonlinear trends with polynomial terms, but because we generally do not know the exact pattern we are trying to identify, it is difficult to know which polynomial terms to include. Another nice feature of GAMS is that they include a smoothing parameter, \(\lambda\), which helps prevent overfitting. Adding in a bunch of polynomial terms, on the other hand, can lead to a very overfit model with poor predictive performance on out of sample data. As such, GAMs can be especially helpful when trying to identify complex patterns, such as spatial or temporal autocorrelation in a species distribution.

How do we do this?

In this example, we will be fitting a single season occupancy model in JAGS with a smoothing term to control for spatial autocorrelation. To illustrate how GAMs help with this, we will simulate some spatially autocorrelated data, fit our model, and then investigate how well our model identifies the spatial pattern we included.

If you are not that interested in this part, feel free to jump down to step 2 where we create the model.

If we plot out the spatial term with plot(plane$spatial) it looks a bit like circle. 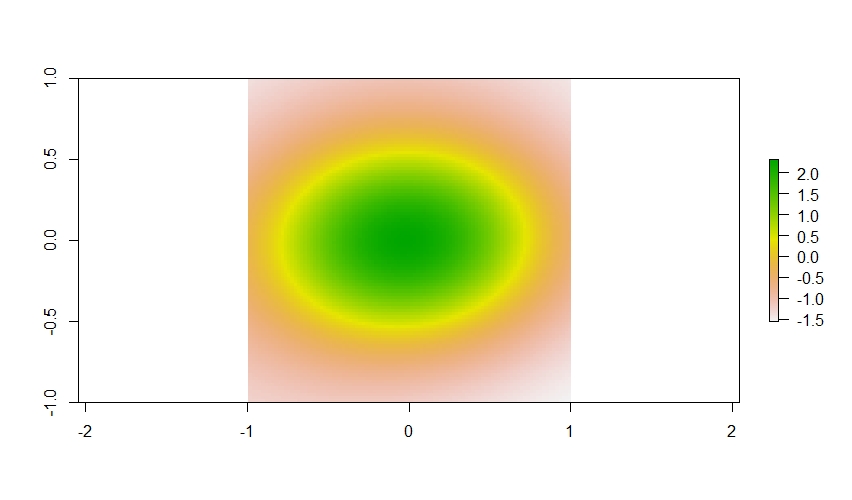 What is important to know here is that we are going to use a smoothing term from a GAM to estimate the values in this spatially autocorrelated data layer within our occupancy model. But before that, lets add just a little more complexity and add one more covariate to this. For this example, let’s assume it represents forest cover, and that there is no spatial correlation in the forest cover data (which is not realistic, but okay for this simulation).

With these two covariates generated, we can go ahead and simulate some data. Let’s put some survey sites over the landscape, generate some species occupancy data there, and try to sample them imperfectly.

And here is where we are sampling across this landscape. 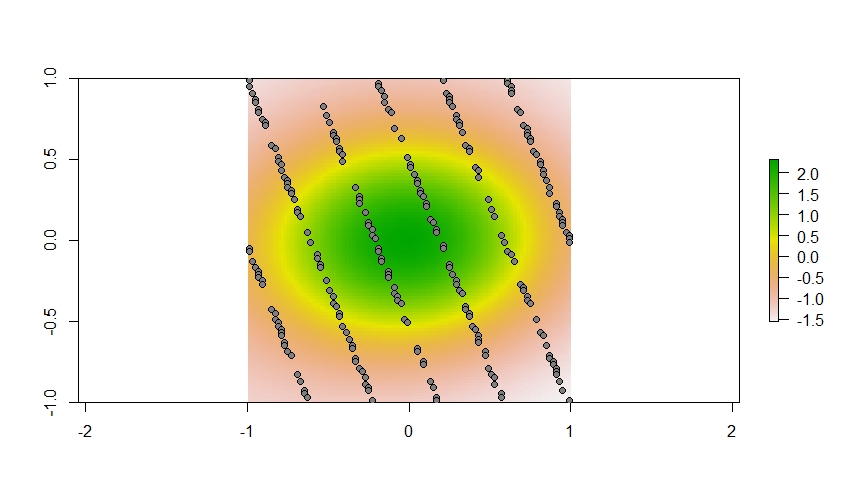 With the covariates and sites created, we can now simulate species occupancy on the landscape. To add an interesting nonlinear pattern, let’s make it so the species is not as likely to occur in the green dot in the center of the spatially autocorrelated data.

And here are the sites where this species does and does not occupy. Generally, this species is not found in that central circle on the landscape. 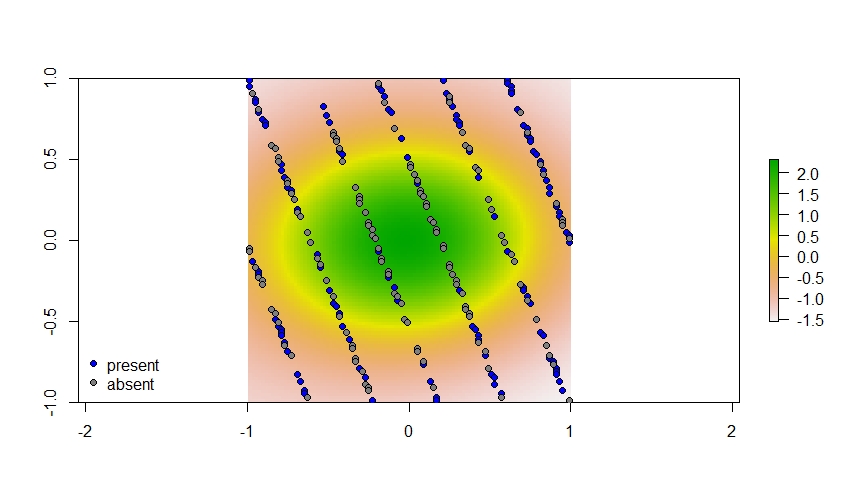 Finally, we get to add some refreshing realism to these data and make the ecologists who went out and collected these data make some mistakes (i.e., add imperfect detection). Nevertheless, we are going to assume they still did an adequate job sampling (i.e., above average detection probability) and that there is no spatial variation in detection.

Okay, and now we can actually start doing some modeling! To create the spatial smoothing term we can use mgcv::jagam(). We’re going to use a thin plate smooth spline on the site coordinates in order to capture the spatial correlation in this species occupancy pattern. The mgcv::jagam() function essentially spins up a GAM in the JAGS programming language. Therefore, all we need to do is pull out the essential pieces of that JAGS script and add it to a standard Bayesian occupancy model. Aside from specifying the type of smoother you want to fit, you also need to input the number of basis functions to generate for the GAM. The higher the number, the slower the model fit, but you also want to make sure you add enough to be able to capture the non-linear complexity in the data (see ?mgcv::choose.k for more details on this). For this example, we are going to use 15. Finally, mgcv::jagam() also creates a few data objects we need to pass to the model, so it’s important to assign the output to some variable.

As we named the file tmp.jags you can open it up in R with file.edit(tmp.jags). It looks like this (below), which already comes with some helpful comments. Now, we could just modify this model to create an occupancy model, but I’m only going to pull out the necessary pieces and add it to a new jags script.

So, we start with this jags script:

Most everything we need is towards the bottom of the script. After removing some for loops we did not need and modifying some priors we end up with:

Which can be thrown into a standard occupancy model.

One important thing to note in this model is that the first b term in the spatial smoothing function is actually the model intercept. If you investigate the X matrix from tmp_jags via head(tmp_jags$jags.data$X) you’ll see the first column is all 1’s. Thus, that first b term represents the overall spatial average while the remaining terms indicate how that spatial average varies through space, while controlling for the influence of other covariates in the model (and of course assuming that you have centered and scaled the other covariates in the model).

Assuming you save this model as a script (e.g., occupancy_gam.R), then you can fit the model. There are a few bits from the mgcv::jagam call that also need to be added (S1, X, and zero), so we add those to our data list we supply to JAGS as well. The model does not especially sample all that efficiently, so we are doing a relatively long model run (note: I would still likely run this longer if this was a real project, the effective sample size of some of the smoothing term regression coefficients is still quite low).

Step 4. Check how well the model did

Because we have simulated data, we can actually see how well the smoothing term captured the spatial autocorrelation in our data. Now, our goal is for the model to estimate the simulated values in our spatially autocorrelated data. We used 15 basis functions to do this. What’s important to note here is that the individual regression coefficients for each of the b should not especially be interpreted on their own. Instead, it is the combined effect of all of them that create our spatial pattern. To check how well the model performs then, we can simply generate a model prediction for what each spatial value should be at each of our 250 survey sites and see if the true value is within the 95% credible interval of that estimate. I’m leaving out graphical model checking for the other parameters, but the true parameter values fell well within the 95% credible intervals for the effect of forest cover (true = 0.5, estimate = 0.63, 95% CI = 0.24, 1.05) and detection probability (true = -0.4, estimate = -0.5, 95% CI = -0.74, 0.26). 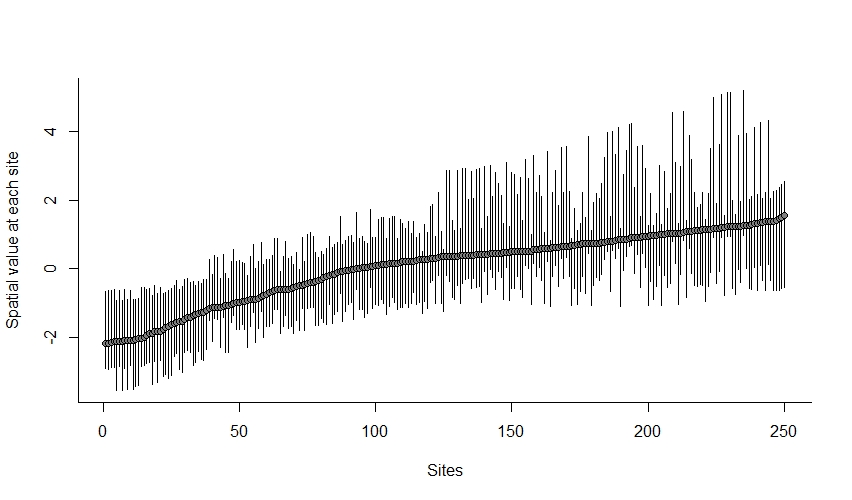 However, in an actual analysis, you will not have simulated values for comparison. So how do you interpret your spatial smoothing term? One way is to plot it out.

And sure enough it looks like it does an okay job capturing the pattern. 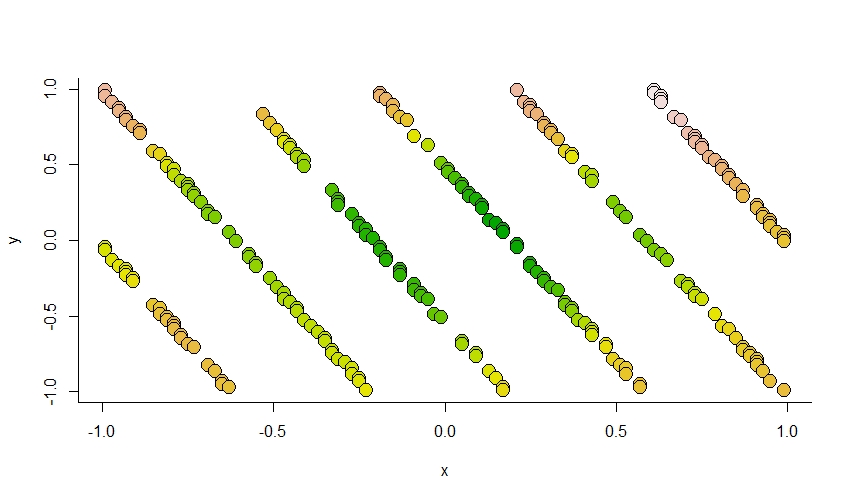 We can take this one step further, however, and plot those simulated values over the landscape we generated. 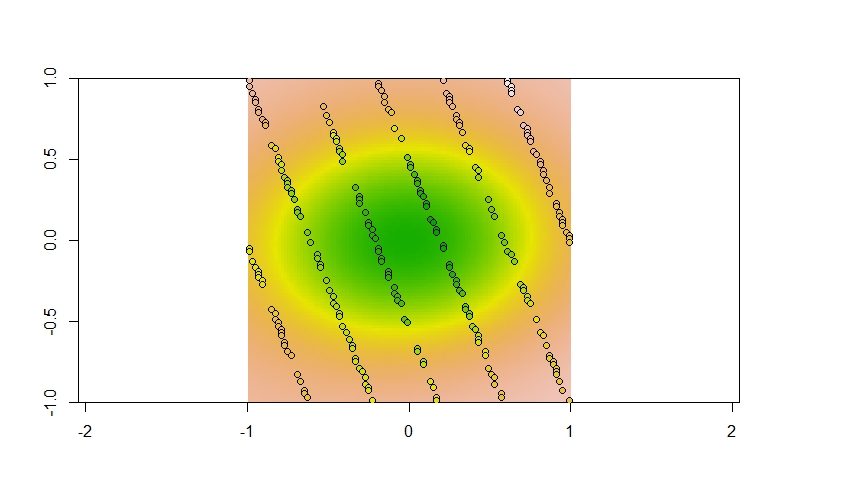 And that is one way you you can make a generalized additive occupancy model in R!